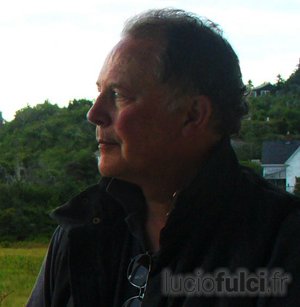 Jared Martin was born in Manhattan in 1941. Pushed by his artistic parents, he began taking drama classes for acting during his teenage years. While at the University of Columbia, he made friends with Brian de Palma, who would direct him in Murder a la Mod (1968). After that, Martin worked steadily on several TV series, including having a recurring role on Dallas beginning in 1979. In the mid-1980s, he gained new experience by starring in features in Europe, including The New Gladiators (1984) and Aenigma (1987), both directed by Lucio Fulci. Back in the North America, he played the main character in the syndicated TV series War of the Worlds (1988-1990). Martin has since started directing films and exhibits work as a fine arts photographer.
Far from denying his career as an actor, he agreed to share with us his memories of Lucio Fulci without protest and with a great respect.

How did you end up playing Drake in The New Gladiators ?

I was in Rome doing an American film called The Lonely Lady. I had an Italian agent – I will find the name and provide for you – and they acquired the role for me. As usual in Europe there was no audition; the Producers agreed on the selection beforehand and I was presented with and offer. Because I was in the beginning of my long love affair with Rome, I snapped it up…

Lucio Fulci wanted the film to be against a new form of fascism. Did he tell you anything about that or did you just talk about your character ?

Fulci directed set-ups, camera moves and action; the words (and actors) were left to speak for themselves, there was little discussion of philosophy or deeper meanings during the shoot.

The New Gladiators was shot at both Elios Studios and Cinecittà. Do you remember which scenes were shot where ?

I’m sorry I don’t have total recall – I believe the battle of the motorcycles was shot in a Cinacitta backlot, the Gladiators quarters and most interiors were shot at Elios.

What about the house where Drake’s wife is killed ?

In the roman suburbs, hired for the occasion.

Lucio Fulci had personality. On the set, was he more lenient with actors he already knew such as Al Cliver, Donald O’Brien or Howard Ross ?

Yes, He trusted them and had a greater comfort level with them. He knew that they knew exactly what he wanted and wouldn’t be wasting his time. They also shared a language… Fulci and I did not.

How was working with Fred Williamson, known for his work in the blaxploitation genre ?

I liked working with Fred. He was a good companion, helpful, instructive, funny, wry, a solid professional. I felt little ego or competition between us. Afterward he wanted me to work in one of the films he was producing but it never worked out.

Did you train a lot for the fight scenes ?

I was in pretty good shape at the time. We choreographed the scenes, but didn’t train for them.

Do you remember the scene where you and Fred Williamson hang Al Cliver to rescue him? Was there a trick done or did you really hang him ?

We hung, when it came time to pass out, we were let down for a rest and camera stopped, then we went back up and resumed shooting. For closeups I remember we were allowed to prop our feet on a stool.

The producers imposed the skyscrapers for the shots of Roma. Did they interfere and try to make changes during the actual shooting?

Not to my knowledge

Do you know why Fulci called you back for Aenigma ? Dr. Robert Anderson is quite a different character from Drake.

Fulci and I were never close, we were totally involved when shooting, and then there was the language. I was surprised by the Aenigma offer, but I enjoyed working in Europe and had never been to Sarajevo so once again I took the job.

You knew Fulci before he was struck down by illness. Was he a different man on the set of Aenigma ?

Less boisterous, less long term energy; he was watching his diet and probably also his behaviour, and he seemed a little more distant or withdrawn. He still had that hedgehog personality and when he shouted it was very easy to hear him.

Do you remember what the place used as the school building really was ?

I believe it was part of a large estate that was Marshall Tito’s residence when he was in Sarajevo.

Lara told me that she was not comfortable with the nightmarish love scene. Was it the same for you ?

I am one with Lara on this.

Can you tell me why ? Because of nudity ?

Because the ‘flesh’ was actually a tired variety of hamburger meat as I remember, the set was hot and confused. There was no ‘acting’, just detail shots and macro effects. Lara and I were more bored than embarrassed I remember, sometimes movies get silly. This was one of those times.

On this film, you also shared some scenes with Ulli Reinthaler (Jenny Clark) and Mijlijana Zirojevic’ (Kathy). What kind of actresses they were on the set with you and Lucio Fulci ? I think that none of them spoke italian or english…

I worked mainly with Lara and Fulci, had few scenes with the other actiors. Both girls were pleasant and professional; but this was a Parliament of Fowles or Tower of Babel set where you basically stayed with the people who could speak your language

Do you know what the story of Aenigma – The Return, a sequel written in the 2010s, would have been ?

When you think of Fulci today, what is the first thing that comes to mind ?

Gratitude for bringing me into two of his films and all the adventures and experiences that transpired during those two shoots; and friends I made, places visited, and even pictures taken for what eventually has become a career in fine art. I felt I never really knew the man. He was an old fashioned top down regisseur – a didactic director working out his visual and dramatic ideas with human props. He was a driven man with a furious work ethic and volatile temper. He was a perfectionist; and filmmaking is the absolute wrong profession for perfectionists unless you are working in animation or have a huge budget and squadrons of qualified assistants. He was a sublimely gifted visual artist, particularly in his early films. He seemed fascinated by DePalma who I went to college with, and Lee Strasberg, who I had studied with before coming to Italy; but that was as close as we got. I respected him, I hope he knew that; but we’ll never know now, will we?