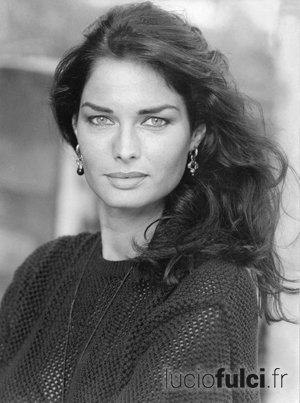 Born in Marseille of artistic parents, Lara Lamberti grew up in Germany before making herself known in the popular Italian cinema during the 80’s. At the end of that decade, she went on to a career mostly in television where she was directed by Sergio Martino, Duccio Tessari and Carlo Lizzani. In the 90’s, she appeared in several TV series in Germany. In 2005, she created her own production company, Alshain Pictures S.L. in Barcelona, Spain and published her first novel in 2013, Mystica – The Beginning.
It is with pleasure that the actress has agreed to remember the shooting of Aenigma and her relationship with Lucio Fulci.

I’ve heard that you first wanted to be a documentary filmmaker. Why (and how) did you become an actress instead? I think that your first part was in La casa con la scala nel buio directed by Lamberto Bava…

My very first part was a historical movie in Germany, Joseph Süss Oppenheimer, directed by Rainer Wolffhardt. I was still in acting school. Then I got my first part in Italy in the movie Il Ras del Quartiere with Diego Abatantuono. I think La Casa con la Scala nel Buio was my third movie, but I’m not even sure.
Yes, I wanted to become a documentary filmmaker, I wanted to film animals. But there were no real film schools at that time in West Berlin where I grew up part of my childhood. So I thought I might start with acting, then leave the country and do what was my dream somewhere else, already being in the movie business. It worked out and I went to Italy, but my career took off and I had no time to do anything else. I would have come back to that original plan much later in my life.

Why did you use your real name? It would have been easier for you to use the stage name Kinski chosen by your uncle and cousin, who were already famous in the business in the early 80’s.

I didn’t want people to have the impression that I made my career using my famous uncle and cousin. I also felt kind of unauthorized to use the name Kinski because I didn’t know anybody of that family. In fact, Kinski is not the real name. The real name is Nakszynsky. But I told my agent about the connection to the Kinski family and of course – little time passed and I was “the cousin of Nastassja Kinski” in every press release. I became the “Polish girl, Nastassja’s cousin”, while a great part of my family is Mediterranean. I didn’t want all this at all, so I decided to give up on the name Nakszynsky I started working under the name of my Italian family.

How did you end up playing Eva in Aenigma?

I was already known in Italy and the production company of Ettore Spagnuolo called my agency to offer me the part. Very unspectacular.

Lucio Fulci had… personality. What was your first impression of him?

I don’t remember, really. I remember him being kind of shy with me. He held me in high esteem, as he did Jared.

Where you familiar with his body of work before working with him?

No, honestly not. I have never been too much into the horror genre.

Did Lucio Fulci tell you things about your character or the story to prepare you for your part? It is known that he was usually more involved in the technical aspects.

I don’t think that he gave us much support with the characters. He was in fact more technical. However, we had some talk about the characters before we started shooting. When we were shooting, he usually would tell us what to do, rather than talking about the emotions behind the actions. It drove him crazy when people didn’t function technically the way he wanted it. He had the scene in his mind and it had to be done that way. Inside the frames created by his technical imagination, we had a lot of freedom though. Some actors didn’t feel comfortable with this way of working. I remember a young girl with a small role who had her own ideas about the way she wanted to work. She was looking for the expression that comes out of the emotions, while Lucio just wanted to see her actions the way he had designed them. He didn’t care whether she found the real emotions inside herself or not. Their encounter ended up every day with Lucio screaming and the girl crying. Her character ended up being almost completely cut out.

Fulci hated the camera operator, Danijel Sukalo. He once said that because of him, you had to do 36 takes for the same shot. Did you feel some tension between them on the set?

Honestly, I don’t remember. There were lots of tensions on the set. Jealousy and strange intrigues were part of this set from day one. There was always tension – because of Lucio himself and the way he treated a lot of people, because of the jealousy that those people felt towards others who got along well with everything and with Lucio, and because there were tensions within the crew.

Was Fulci more lenient with his own daughter, Camilla, who worked as a script supervisor with him?

I would definitely say yes. Absolutely.

Did the producers interfere and try to make changes during the shooting?

We were shooting all the time in Yugoslavia, with no break at all. The producers were in Rome and didn’t visit. So there was no interference on the set. But I know that the footage was regularly sent to Rome where it was being watched by the producers, present also Lucio Fulci and the director of photography.

The production started the 3rd November 1986 in Boston. You then went to Sarajevo, Yougoslavia…

I wasn’t in Boston. I was only in Yugoslavia.

Do you remember what the different locations in Sarajevo were? The ones which became the hall of the school, the cafeteria, the classroom, the gymnasium…

I don’t remember the names. We mostly worked in a big house which was the school building. Almost everything that we were shooting was done there, with a few exceptions like the scene with Dr. Anderson at the car and the garden scene. I don’t know whose house the school building was.

How hard was it to act/work with actors speaking different languages?

I remember that we mostly worked in English, whether people spoke it well or not. I had already been in several “babelic” productions and was used to this situation. The fact that I speak 6 languages fluently was always a welcome option to have the dialogues played in the same language instead of two different languages. However, I have to say that part of the concentration that should go into the acting goes into the languages issues if you do this. It is certainly a lot more complicated than acting just in one language – also because every language somehow changes the character that you’re interpreting.

What was the most difficult scene to shoot? The nightmarish love scene with Jared Martin? Your nervous breakdown?

The nervous breakdown was technically complicated. I had only one try – because I basically had to destroy the whole room. The production didn’t have everything available a second time. So Lucio warned me already before that if something in the action went wrong, that would have been a disaster. There was a certain tension when we tried. I had to perform the action without hitting the objects. Then we did real thing – and the camera failed. I remember Lucio being furious. However, the second time it all worked out.
The nightmarish scene was difficult for other things. I’ve never liked to be naked in front of the camera, and I didn’t like it then. I also didn’t like the meaning of the scene, and the bloody picture painted in the scene. It was a very technical scene again – and I couldn’t find the emotion for it. I was helped a lot by our director of photography who thoroughly explained to me before what they would do, what the intention was and what the audience would actually see. He had the sensitivity that Lucio definitely lacked.

In 2011, painter and author José Da Silveira wrote a follow up of Aenigma, entitled Aenigma – The Return, with Jared Martin and me attached. The project is still awaiting realization.

When you think of Fulci today, what first comes to mind?

Lucio was bitter and lonely. He had a very rare form of hepatitis – today I would think it was hepatitis C – and couldn’t really eat. He sat at his table with his daughter and swallowed down his rice without any condiment, while we all had fun; we were eating good stuff and were sitting together at other tables. I don’t know whether his being alone was a choice or an unwanted and already sadly accepted side effect of his way of being. I don’t know if I ever saw him laugh. But I also remember Lucio as a very professional director, a hard worker and someone who was extremely respectful and polite once he was convinced of someone’s talent and experience. I had no problem with him at all. For me it was a pleasure to work with him, and many of his extremely rare smiles went to me. I was so very young at that time. Looking back I have to say that maybe it would have been worth a try to crack his seemingly harsh surface and know more of him and his life. I wish I had done it.

« Larry Ray – actor/assistant to the producer (The Beyond)
Jared Martin – actor (The New Gladiators, Aenigma) »